Today, 28 January 2021, the Her Choice Impact Evaluation by the Amsterdam Institute for Social Science Research of the University of Amsterdam has been published. This publication highlights the work of all partners and stakeholders who dedicated themselves to ending child marriage in almost a thousand communities, and who trained just under 300,000 girls.

The study shows that the number of child marriages in the Her Choice working areas in most programme countries has declined impressively over the past five years. The largest decrease in child marriage has been established in Her Choice working areas in Mali, Nepal and Pakistan. The Impact Evaluation shows that very few to no girls under 18 were still married in those areas.

During the implementation of the programme, the number of girls attending school in the Her Choice areas increased remarkably. This increase was most spectacular in Pakistan (from 43% to 83%) and in Mali (from 54% to 90%) and is partly due to making schools more girl-friendly.  Separate sanitary facilities and safe spaces were created where girls can wash and rest during their periods. Child protection measures and the appointment of a counsellor/focal person also made schools a safer environment for girls.

In order to tackle teenage pregnancy, which is closely linked to child marriage, the research results show that investing in training of teachers in comprehensive sexuality education makes sense. Additionally, a growing number of girls visited health centres that provide SRHR services and psychosocial support. In Bangladesh this percentage rose from 19% to 52% and in Mali from 14% to 59%. Referral mechanisms between schools and health centres were establishes and youth-friendliness of health facilities increased. The raise in number of single and sexually active girls who indicate that they use contraceptives (in Burkina Faso 76% and in Mali 94% at endline) as a result of more openness about sexuality, is another striking result. 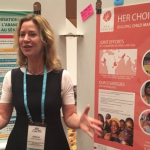