News
You are here: Home / News / Uncategorized / Speaking out against child marriage, violence against women and child sexual...

At the second Annual Provincial Conference on Girls Rights in Pakistan parliamentarians, civil society and academia decided to join forces in the quest to end child marriage. This conference was organized by Bedari, local partner in Pakistan of Her Choice alliance member ICDI, as part of the 16-day campaign focused to end gender based violence. It was agreed that child marriage goes hand in hand with the physical, emotional or economic violence that girls and women face.

There were some inspirational speakers at the conference, who had some powerful messages for the audience. Ms. Kaneez Fatima, Chairperson of the Punjab Women Protection Authority, announced that the government will establish four new women protection centers in the province.

She said that the government is focused on improving the conditions of Dar ul Amans (women’s safe houses). She added that to tackle abuse, we should teach our children to share any unusual incident with parents first and parents should learn to listen. She also announced that the Government of Punjab will organize a new awareness campaign against violence in December 2019. 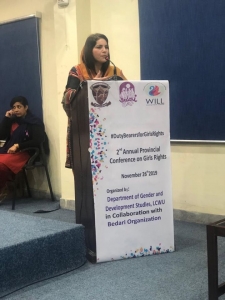 Right to education for all

Ms. Sadia Sohail, member of the Punjab Assembly said that Pakistan has excellent laws and legislations against violence against women. She also added that the constitution of Pakistan ensures the right to education for all which is a strong tool to have in stopping child marriage. 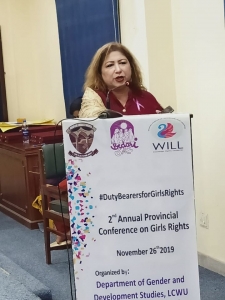 Ms. Anbreen Ajaib, Executive Director of Bedari confronted those who say marrying their children at early age is a right strategy for poor families. She asked whether a young girl with two small kids has any control over her financial situation or chance to get out of poverty? (Off-course not)

We must address sexual abuse

Mr. Saleem Malik, a prominent child rights activist, enlightened the audience about child sexual abuse and ways to control it. He said that to solve this problem, first we should accept that our children are facing sexual abuse as ignoring this fact will not solve it.

Ms. Angaline Malik, a media expert, said that said that the media penetrates even the remotest areas of Pakistan. Drama and visual work are powerful tools to change the mindset of people. She talked about a new campaign about awareness for children and showed her pilot documentary.

Program Director at Oxfam, Adeel Qaiser, concluded that informed and literate people have the responsibility to create awareness among people who do not have access to information and knowledge of their rights. He encouraged students to develop solutions to problems such as lack of education in rural areas and the phenomenon of child marriages. 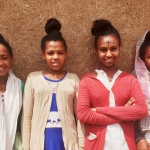 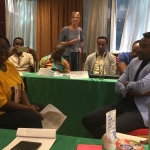