There is a special list hanging in the village communal hut of Basan, a little Nepalese village in the Terai region  -close to the Indian border – of only 75 households sitting on the banks of a river. It takes a two hours’ drive along battered roads and through the river to reach Basan from the nearest town. Only two years ago, child marriage was still highly practiced in Basan. Despite 20 being the legal age for marriage in Nepal, 41% of girls are married before they are 18, and 29% by the time they are 15. Comparable figures applied for Basan.

Reasons for parents to marry off their young daughters and sons had everything to do with traditional belief and social norms, some of them practiced for centuries. The belief for example that if you marry before menstruation, you will go to heaven, or in the case of grandparents who believe that if they can marry off their grandchildren, they themselves will go to heaven. Or the mind-set that girls are not meant to stay in their parents’ house. And then there is the issue of paying dowry, a major issue for the poor households in Basan: the older the girl, the more dowry they have to pay.

But let’s go back to the list. This starts with an agreement: to have your children married before they become at least 20. Underneath we see a lot of names and signatures. These turn out to be the names of the inhabitants of Bashan. Note: from all residents. 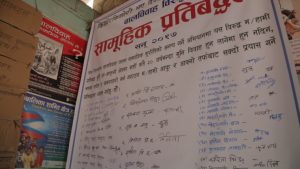 The list -so proudly hanging in the village communal hut- wasn’t there two years ago. So what happened here? We have to go back to the summer of 2017 for that, when a group of boys and girls in 2 villages in the Terai region decided to take it in their own hands to make their communities child-marriage free. With the support of CWIN – Her Choice partner in Nepal – these teenagers held workshops in their village to convey their key messages to all inhabitants: child marriage and child pregnancies must end, boys and men must be more involved in the fight against early marriages and: it is possible to end child marriage.

17-year-old Akash was one of them: he worked with other boys and teachers at his school to raise awareness about stopping child marriage. Akash campaigned especially among the men who are the leaders and decisionmakers, but also among boys, who are just as important: ‘It’s the boys who also need to step up and act. The boy needs to say: ‘Father, please don’t do this to me. My education is at stake, I want to study. It is very hard for the boys after marriage. Before marriage they can go places, play and have fun. After marriage he has to grow up.’ Akash’ work has been a success: together with his peers he made sure that all inhabitants of Basan put their signature, committing themselves not to have their children marry too young.

Families arranging marriages between daughters and sons at an early age, regarding girls as financial burden or source of income and giving priority to the education of sons, the taboo on premarital sex and therefore marrying off girls when they get into puberty: social norms and traditional practices play a major role in the continued existence of child marriage. One of the six strategies Her Choice applies in the field addresses the transformation of social norms and traditional customs that are fostering child marriage. The story of Akash and his friends is an example of putting this strategy into practice. 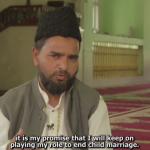 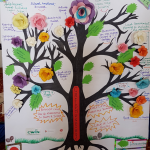