Her Choice is one of three Sexual and Reproductive Health and Rights (SRHR) alliances working in partnership with the Netherlands Ministry of Foreign Affairs in the field of child marriage. Her Choice aims to build child marriage-free communities, and also aims to reduce incidence of female genital mutilation/cutting (FGM/C).

FGM/C prevalence and laws against FGM

FGM/C happens in all African programme countries – albeit with different prevalence – and is prohibited in all countries but Mali. Table 1 gives an overview of prevalence and legislation, based on UNICEF 2020 global data bases. National prevalence is highest Mali, Burkina Faso, Ethiopia and Senegal, and very low in Uganda and Ghana. Table 1 indicates that prevalence is much lower in the age group 0-14 years than in age group 15-49, except for Uganda. Because FGM/C normally happens at a young age, either soon after birth or in the first years after birth, the figures indicate that the national legislation on FGM/C has had effects on reducing the incidence.

Her Choice addresses FGM/C through activities in five of the six programme strategies. Within the Her Choice framework of Strategy I (investing in girls, their knowledge, skills related to Sexual and Reproductive Health and Rights (SRHR) and participation in society), girls are offered various educational programmes which aim to build their SRHR-related knowledge, including on negative effects of FGM/C, and their lobby and advocacy skills. For example, in Ghana, all club members and schools in implementation areas were regularly reached with education on child rights and laws on FGM/C and other abuse against children. They also received information on official institutions responsible for the protection of their rights and how cases of abuse can be reported.

At midline, a considerable proportion of interviewed girls had been trained already – ranging from 60% in Benin to 82% in Ghana (Figure 1).

Within the Her Choice framework of Strategy II (improve access to formal education for girls) and Strategy III (improving access to youth-friendly SRHR services for girls) across countries, teachers and health personnel are trained on being aware of and vigilant on harmful consequences of FGM/C. Teachers consequently address harmful consequences of FGM/C in their SRHR training to their students.

Within the Her Choice framework of Strategy V (mobilizing communities to transform social norms that are detrimental to achieving gender equality) the Her Choice programme organises various forms of community level activities, including training of relevant community stakeholders, and facilitation of community dialogue on the negative effects of FGM/C.

The existence of a national law against FGM/C does not mean it is enforced. In light of difficulties in national enforcement of legislation, in the framework of Strategy VI (creating an enabling legal and policy environment on preventing FGM/C), the HC programme seeks to support a) communities to develop bylaws against FGM/C at community level, and b) district departments to better enforce existing national laws.

Expected outcome of SRHR training on FGM/C is that girls have negative views on FGM/C. In all Her Choice villages, the vast majority of single girls (from 75% to 99% across countries) reported in the midline that they oppose FGM/C. At midline more girls in all countries but Ghana indicated they were against FGM/C when compared to the baseline. Considering the low share of girls who opposed FGM/C in the baseline (17.3%), and the absence of legislation against FGM/C in Mali, the high share of girls opposing FGM/C in Mali is striking (81.9%) – this is most likely an effect of Her Choice activities related to SRHR training of girls.

Young people taking part in the midline focus group discussions (FGD) were asked what they thought of when hearing the term ‘female circumcision’ and what they considered as positive and/or negative effects of FGM/C. Their responses in the two boxes below indicate that they consider FGM/C being cutting of (part) of the clitoris, related to early marriage and to pain and death (Box 1). Most young people see mainly disadvantages, but some also are of the opinion that there are some advantages because FGM/C is considered to control female sexuality, and therefore to prevent teenage pregnancy and consequently early marriage (Box 2).

Box 1: What is female genital mutilation or circumcision?

The FGD participants’ most common responses were ‘cutting or removal’ of the clitoris, or parts of it, with many participants associating circumcision with the ‘preventing girls from having sexual feelings.’ Noteworthy in this regard was the association of circumcision with ‘purification’ (girls, Mali), with the prevention of promiscuity as well as the prevention of early marriage. As young men in Ghana indicated: ‘[FGM] means that the clitoris which is the sensitive part is cut off to prevent girls from having sexual feelings to prevent early marriage.’ The use of the term ‘early marriage’ in this quote would seem to denote an unlicensed sexual relationship at a young age, that is, one that has not been approved by the family or community. In other instances, circumcision was associated with marriage – during an FGD in Burkina Faso, boys responded by saying that ‘L’excision, c’est se marier’ [circumcision means marriage], for example. Other young people engaged less with the actual definition or purpose of the procedure and more with the feelings the term evoked. As young men in Burkina Faso explained: ‘Quand j’entends parler d’excision, je pense au sang, je pense aux violences faites aux filles’, [if I hear about circumcision, I think of blood, I think of violence against girls] and ‘Moi, je pense surtout à la douleur’ [I mainly think of pain].

The increasing number of village leaders who have been trained on the negative effects of FGM/C, is expected to lead to whole villages rejecting FGM/C. Minor increases were found at midline in the share of villages that had bylaws or were in the process of developing FGM-related bylaws. The biggest increase was in Burkina Faso, where at midline 5 out of 8 villages had such bylaws, and one was developing these bylaws. However, most research communities do not have bylaws related to FGM/C.

When (by)laws are in place and are enforced, it is expected that young women are (better) aware of the existence of laws against child marriage and FGM/C. At midline, in all countries but Uganda a higher share of girls was aware of existence of laws against FGM/C. Because there is no national law in Mali, the figure in Mali is very low – the girls who are aware may have come from the one village that is developing bylaws. 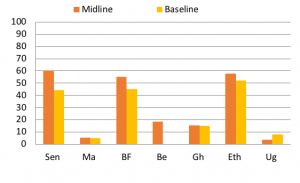 Figure 3: Share of single girls who know about protective laws on FGM/C (%)

The annual report of 2018 shows that girls in implementation areas in Ethiopia better understand protective laws regarding FGM and the number of girls who ask support from legal institutions has increased.

The rates of FGM/C among the interviewed girls vary considerably, with highest rates in Mali where near to all girls are circumcised and Senegal, where about two thirds were circumcised during the midline (Figure 4). Hardly any girls underwent FGM/C in Benin, Ghana and Uganda. Comparing the study figures with the national figures in Table 1, we see that they coincide for all countries, except for Senegal. The higher figures in Senegal can be explained because our study took place in regions (Kolda and Tambacounda) with known higher FGM/C rates. The FGM/C rate for women 15-49 in Kolda Region is 94% and in Tambacounda region 86%.[1]

Most girls, who reported that they had been cut, did not know the age this had taken place. However, those who knew mentioned ages from 0 to 4. Village leaders reporting on the normal age for FGM/C also indicate ages below 7 years.

Young women and men participating in the FGDs suggested FGM/C had a range of benefits and disadvantages. In Benin there was broad consensus that FGM/C did not have any advantages, girls associating the practice with ‘death of the girl,’ and HIV and AIDS. The association with death was repeated more often across the other countries, with young men in Burkina Faso suggesting the practice ‘can make a girl sick,’ referring to ‘psychological trauma’ and associating the procedure with ‘[loss] of blood’ and (subsequent) death. Other disadvantages mentioned more frequently related to the potential of the practice ‘[spreading] disease since the blade is used on several people.’

Noteworthy were the contradictory statements regarding the relationship between FGM/C and birth, that is while some young people believed that a woman who had been cut had more difficulty giving birth (or could not give birth at all), others suggested the practice allowed for easier child delivery, with girls in Burkina Faso clarifying that ‘some parents think that it will facilitate the birth’.

While the FGDs suggest that young people generally regarded FGM/C to largely have negative effects, the practice was seen by some as having certain benefits. These benefits mainly related to ‘reducing sexual desire’ and controlling female sexuality more broadly, and the subsequent positive effects of this reduction and control in terms of reducing teenage pregnancy. As a young man in Ghana indicated, for example: ‘I think it is good because it reduces the cases of teenage pregnancy. If it was being done here the teenage pregnancy cases will reduce’. (The addition of ‘if’ in this statement is striking, suggesting that while girls were not cut in this particular community, certain benefits were associated with the practice.)

In a similar fashion, young women in Uganda associated FGM/C with a reduction of ‘early marriage,’ suggestive (once again) of teenage pregnancy as a critical causal factor of early marriage. According to boys in Mali, cutting ‘makes the relationship between the man and the woman harmonious,’ while their peers indicated that FGM/C caused ‘problems in sexual life of the man and the woman.’ There seemed to be most consensus between young women and men in Senegal – participants speaking of the earlier mentioned perceived benefit of ‘circumcised’ girls abstaining from sex until marriage combined with the association of cutting with ‘purity’, health and womanhood. Young men observing that a girl who is not cut ‘is not a girl and is not considered as such by the community.’ According to these participants ‘something’ had to be removed from the girl ‘otherwise she will be sick.’ The notion that an uncut girl not being considered a (proper) girl is in keeping with literature on the function of FGM/C a means to mark the passage into womanhood and a member of the community.

Not much change was expected in midline compared to baseline because girls are usually circumcised at a young age and thus effects of programme activities cannot be seen in just 2 years between base and midline. The fact that there was considerable reduction in Burkina Faso may be explained by the higher normal age of circumcision and may be an effect of Her Choice. According to village leaders’ reporting, in more than half of the villages in Burkina Faso, the normal age for FGM/C is 16. 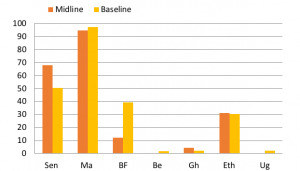 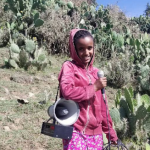 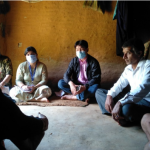 Prevented child marriages in Nepal during lockdown
Scroll to top