News
You are here: Home / News / Her Choice / Strategy II: getting and keeping girls in school

The longer a girl is in school, the later she gets married. That’s why one of the six strategies Her Choice applies in the field addresses getting and keeping girls in school: by improving access to formal education for girls, by supporting school managers and teachers to take measures to create girl-friendly schools.

The long-term goal of the Her Choice programme is to support the creation of child marriage-free communities in which girls and young women are free to decide if, when and whom to marry. The six intervention strategies are based on evidence, which shows that the most consistent results of targeting child marriages are achieved by fostering information, skills and networks for girls in combination with community mobilisation. Therefore, strategies focus on both areas.

Education is one of the best ways to prevent child marriages: the longer a girl is in school, the later she gets married. The second programme strategy of Her Choice is therefore geared to improving young women’s access to formal education by addressing barriers to access and regular attendance.

From Her Choice study findings and accounts by programme staff we know that the main barriers to be enrolled in school or to regularly attend school relate to girls having to do household chores, having to take care of young siblings, family not having money for school necessities, girls being harassed on the way to or in school and being married. Underlying reasons for the barriers are poverty of families, families not acknowledging the importance of schooling for girls; and unequal gender relations. Some girls and boys themselves are not interested in school, because they think the quality of the teaching and school infrastructure is low and that schooling does not guarantee a future with sufficient income. 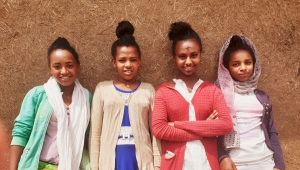 In most countries the majority of girls who were schooling before marriage, stopped schooling as soon as they got married. The exceptions were in Senegal and Nepal, where about an equal proportion of girls said they kept going to school as who said they stopped. Also in Mali some girls kept schooling after their marriage. From informal conversations by an AISSR team member in Senegal and Master Research of the University of Amsterdam conducted within the Her Choice programme, we know that some families who marry their daughter negotiate her continued school attendance, with school fees and expenses covered by the husband. None of the married girls reported that they started schooling after marriage.

Thus, midline study findings suggest that the relation between schooling and child marriage is two-fold and differs across countries: girls who are not in school are more likely to marry (more reported in Pakistan, Benin and Ghana), and after marriage most girls stop their schooling in most countries.

Local partners were asked whether there was any legislation in place that prohibited or promoted married girls from continuing their formal education. Partners reported that governments in Ethiopia and Pakistan are working on policies to encourage married young women return to school, whilst in Uganda and Ghana, such national policies are already in place. In Ethiopia, married girls can also enroll in the integrated functional adult literacy program. None of the partners spoke of legislation prohibiting married young women from continuing their schooling.

However, whether or not policies are in place to promote married young women’s educational participation, available qualitative data suggests that married young women may feel ashamed to go back to school and/or may be teased by their peers and teachers when they do.

Her Choice activities aimed at keeping girls in school

In all programme countries, a range of activities has been carried out to improve girls’ (and boys’) access to school and to minimise their dropout. Strategies to motivate girls, boys and their parents to seriously invest in schooling include providing insight on the long-­term benefits of education through girls’ and youth clubs and parent meetings, deployment of inspiring role models and providing scholarships for the poorest families. They include also dropout monitoring, sexual harassment prevention committees and teachers patrolling against ‘eve teasing’, providing alternative education spaces to reinforce students at risk of dropping out and/or to reintegrate students.

In order to increase girls’ enrolment in high school, local partner Bedari from Pakistan provided bicycles to 70 girls. As one of these girls’ father is an influential religious leader, this inspired 11 more families to purchase bicycles for their daughters, which means a significant change of social norms. Partners in Burkina Faso, sensitize communities to keep married girls in school and lobby with schools and governments. They sensitize and support girl-mothers to overcome the self-stigma and return to school.

Local partners have trained teachers and school leaders in all programme countries on the improvement of their SRHR teaching skills geared to young people and to provide an adolescent/girl-­friendly school environment. Training by Her Choice partners includes raising awareness of the teachers’ responsibilities to support students to continue their studies, to ensure that students’ rights are respected and protected, and to prevent (sexual) abuse and harassment.

Additionally, partners in all programme countries have supported schools to take measures to increase the girl-­friendliness of their schools, including for example installing separate toilet facilities for girls and boys and offering girls menstrual pads. By training of teachers and school managers local partners create awareness of what girl-friendliness means, and what the importance of gender equality is.

In most implementation areas, girls –and sometimes boys– have been taught to produce sanitary pads themselves. The Hunger Project Uganda and ESD Ethiopia conducted campaigns to break the stigma around menstruation. This included training boys to make re-­usable sanitary pads to prevent girls from dropping out of school because of menstrual hygiene issues. 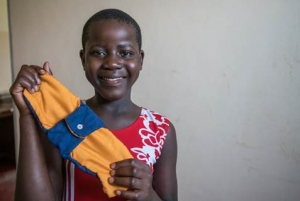 Case: Breaking the stigma around menstruation in Uganda

In the countryside of Uganda, girls do not have access to sanitary pads, because they are not available or are too expensive. In addition, often there are no proper toilets, sinks and running water in the village schools. As a result, menstruating girls stay at home and miss school for a week every month. And that while education is one of the best ways to prevent child marriages: the longer a girl sits in school, the later she marries. That’s why Her Choice encourages girls to go to school for as long as possible – and that they actually go to school every school day. Local partner The Hunger Project Uganda work on schools with good quality education where girls feel safe. They do that through Girl and Youth Clubs, among others. In the Youth Club of epicentre Namayumba in Uganda, girls, like 12-year-old Ruth, make their own sanitary pads. And the boys also participate. In this way they break the taboo around menstruation. And with the sanitary pads the girls can also go to school during their period.

In Senegal, a number of schools in the regions Bounkiling and Kolda have adopted charters of non-­violence for a child-­friendly environment. The Hunger Project Ethiopia and Ghana organised peer-­education, involving boys to act against gender violence both in school and in the community. This has resulted in a reduction of harassment of girls in schools and beyond.

Partners from all programme countries report that enrolment and regular attendance of girls in primary and secondary schools has significantly increased. Moreover, improvement of academic results of the targeted students, sometimes as a result of the tutorial support to low performing students, has been noticed. In some intervention regions in Mali, all children that could attend school are indeed attending. Local partner ESD from Ethiopia reports an increase of 49% of girls’ enrolment in a secondary high school (SNNPR region) as a result of Her Choice staff’s continuous motivating discussions with students and parents, as well as community self-­help groups’ support to the poorest families.

In Senegal, the flow of girls from primary to secondary schools in intervention areas has increased from 90 to 98%. The Hunger Project Ghana reports an increase of girls in junior high school who excelled in their Basic Education Certificate Examinations to enter senior high.

In Burkina Faso, Ethiopia and Ghana, a number of child-­mothers have returned to school after childbirth, thanks to the sensitization to overcome the stigma of being a child mother. There are also some ‘success’ stories in Uganda, Ghana and Burkina Faso where Her Choice partners have successfully worked with families, schools and girls to get married girls or teenage unmarried mothers back in school.

Midline study findings – that only relate to a few of the programme villages – show considerable increase in girls’ school enrollment in Pakistan, Mali and Burkina Faso compared to the baseline before programme activities started (in 2016). In most other countries there is a small increase.

In the implementation areas of all programme countries, schools have increased taking measures to make the school girl-friendly including clean, separate toilets for boys and girls, a safe space for girls to rest and freshen up during menstrual period, ‘dignity toolkits’ containing relevant information materials on menstruation and sanitary pads; addressing gender based sexual harassment and violence.

All school principals, in the midline study, indicated they had taken measures to make their school more girl-friendly. The questionnaire contained a list of measures, which were constructed on the basis of a review of (development agency) standards for girl-friendly schools and following extensive discussion with local partners and alliance members. These measures were: schools having a counsellor; a referral system for girls (to authorities and health centers); good quality separate sanitation facilities for girls; a girl club/mini media unit; a gender balanced body of staff; dignity kit for girls in need; staff trained on gender sensitivity; girls rooms/safe rooms for girls; and a water point. Additional measures were schools putting up fences and seeking to involve girls in expressing thoughts and claiming rights. Most popular measures, taken in at least some schools in most countries, related to the school having a school counsellor, separate toilet facilities for girls and boys, a water point and involving girls in decision-making processes. In some schools ‘dignity kits’ had also been provided, especially in Mali where 6 out of 7 schools reported they had such kits. Overall, the girl-friendliness of schools in studied intervention areas has increased.

Her Choice partners in Ethiopia and Ghana indicated that, generally speaking, school principals have come to understand the concept of girl-friendly schools and appreciate the need to promote girl-friendly schools. They foresee that the Her Choice visualization tool ‘Assessing Girl Friendly Schools’ developed in 2018, could further support bringing about improvements in this regard.

In most countries, the share of schools with teachers trained on SRHR has increased in the midline compared to the baseline. In the midline study in Bangladesh, Nepal, Ghana and Uganda all schools had teachers trained in SRHR related education, in the other countries some of the schools. Sometimes teacher support groups or counsellors, to whom students can share their concerns confidentially, have been established in schools. In Benin, this has resulted in bringing back to school several girl students who had dropped out. 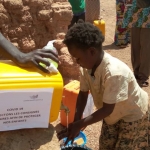 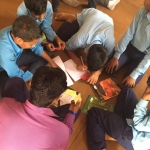